CEO for a Day 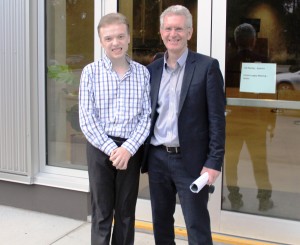 What would you do if you had an opportunity to take part in being mentored by the CEO of Community Living British Columbia for a day! There is only one thing, everyone wanted the opportunity! I found out that I needed to write a letter stating why I wanted to be mentored by Ross Chilton CEO of CLBC to be able to take part in the MentorAbility Canada Project.

I did just that! Here is just one part of my letter:

When I graduated I realized that things were going to change and I had to figure things out.  I found this quote by Stephen Hawking that says “However difficult life may seem, there is always something you can do and succeed at.” I decided that I would like to work in an office setting to get to my long term goals of working alongside some people that could affect change in government and issues for the better. I successfully completed the Office Assistant Certificate Program at Okanagan College.”

I would love to be mentored by you to see how you affect change as a CEO for Community Living British Columbia. It would be my hopes and dreams to be able to work for a company such as yours to help others find the resources that they may need and facilitate change in the world for persons with diverse abilities.

My letter was chosen and November 25 was set for the MentorAbility Day. My Vocational Counsellor and I met Ross Chilton in Langley so we could ride with him on his busy day with the CLBC Board Members visiting sites.

I asked Ross what the hardest part of his job was. He said “Probably when you have to fire someone. You don’t want to do it but it’s something that is required of me to do.” We shared a little about ourselves with each other on the drive.

The first stop was in Abbotsford visiting a new service site, where the participants had prepared a tea for the end of the tour. It was a great way to connect and talk to service providers to see what they offered and how things are going. A picture was taken of all the CLBC Board Members and Service Providers.

As we went on to the next destination Ross explained, “Part of my job Tyler is listening to people give feedback at all the meetings I go to. They appreciated that I w 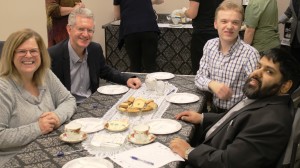 Ross had explained at the beginning of the day it was important to keep on time to the schedule because he didn’t like making anyone wait.

Ross was glad I had asked questions. He said, “To be a CEO you have to ask a lot of questions.” I asked did you have to interview for your position? “Yes, they asked me a lot of scenario questions about Money – Financial, People – Human Resources and Managing Operations. When you have this much authority they need to know that you are able to take care of all aspects of the corporation.” Ross explained that before he was a CEO he had to do a lot of other jobs. His first job was delivering newspapers. Ross said,” It took me a very long time and a lot of different jobs experience, schooling before becoming a CEO. You have to make your way up and show you can do it!” I asked if he meets people in other provinces. “Yes, I have met people in Alberta sometimes it helps to see what another province is doing and we share ideas.” Have you ever met any cabinet members? Ross said, “I have met the Premier of BC, Minister of Social Development and Poverty Reduction, Minister of Mental Health and Addiction and more.

We ended up in Langley for the final presentation of the day. It was a great presentation on Life Based Services. Ross gave a message and a picture was taken with all CLBC Board Members and service providers. I thanked Ross for everything and ended the day with a picture of me getting a glimpse of CEO for a Day!

“I really appreciated the opportunity to spend the day with Ross learning what he does. I was very inspired how Ross listened to everyone’s needs. I realized to be a CEO, Ross had to do a lot of jobs over a long time to take him where he is today. I shouldn’t give up on my dreams because there are things that are long term not short term and it takes a very long time to be a CEO. My first job was a paper route like Ross and my end goal is to work full time in an office one day in the future. I think this MentorAbility is one step in my learning and growing towards my hopes and dreams.”